Home Animation Pacific Rim VFX Breakdown
Share on Facebook
Tweet on Twitter
Pacific Rim was a terrible movie, it was cliched and damn predictable.
But it was visually spectacular because amazing Visual Effect artists and Animators had created this giganatic deadly killing machines along with never seen before sea monsters/aliens.
Pacific Rim had stunning fight sequences. ILM has worked on most of the scenes teaming up with other VFX studios.
Here’s the Before and After VFX reel of <strong> Mirada Studio</strong>, the video breakdowns VFX in Pacific Rim. 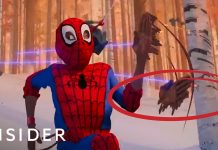 How ‘Spider-Man: Into The Spider-Verse’ Was Animated