Today I was going to review another animated short but one of my favorite animators Ryan Woodward shared this animation gem he worked on for the League of Legends;  this animated piece is mind blowing. I watched and re-watched it again and again, still can’t get over this amazing sequence.

Here are the 4 things that stand out

If you’ve watched good and bad action sequences; you would immediately realize that Clarity is the most integral part of action sequences. Creating stylish action sequence without sacrificing clarity is hardest thing there is. In this entire sequence, even when things slowly snowball into intense fight, the camera and animated performance never betrays the eye. There’s great care has been taken while choreographing movements so that every opponent that goes down or every single significant blow is highlighted either by anticipation or pause afterwards. There are many nuances that come to light when you watch it in slow motion. (Tip : Always, Always watch the action sequences that you love in slow motion)

I have always admired Ryan Woodward’s sense of beautiful rhythm and incredible arcs. When I was watching the 4th time, I realized how visually catchy the rhythm is to this piece. You soon visually expect those movements and start to enjoy the big beats(significant strikes) even more. It’s not entirely fast paced, the intensity increases towards the end and there’s clear peak(climax)) for the action sequence, just like 3 act story structure – Clear Beginning – Middle – End

This sequence is a great resource to study and breakdown how those three things can create mind blowing action scenes. There are so many examples of strikes and impacts this piece contains that teaches the interconnection of Force, Weight and Arcs

All action scenes in this short, the strikes and their impacts, follow the contrast of Rigid and Flexible. Look at the weapons, even when they are rigid in between impacts how brilliantly artist takes the advantage of hand drawn animation and achieves fluidity by bending the weapons. And even after this clever contrast trick, the impact doesn’t loose the intensity, in fact it becomes even more interesting. The weapons don’t look like rubber either. When you watch in slow motion, you realize it’s unbelievable how much things have been bent, pushed and smeared to create this amazing animated performance.

*This Article was originally written for KennyRoy.com in 2017* 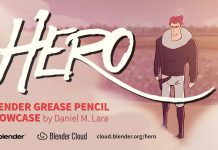